Founder of Florida Defenders of the Environment

She Led the Fight to Stop the Cross Florida Barge Canal

Over fifty years ago, Marjorie Harris Carr and her organization, Florida Defenders of the Environment, pressured Richard Nixon to halt the Cross Florida Barge Canal. Before it was stopped, a third of the projects were completed including the Rodman/Kirkpatrick Dam near Palatka, Florida.

Listen below to an introduction by her granddaughter Jennifer Carr, following in her footsteps as President of Florida Defenders of the Environment. This was recorded during this year’s Mother’s Day celebration in Carr’s honor.

The following videos are lectures by historian and author Peggy Macdonald. She shares an inspirational message through Marjorie Harris Carr’s life and work. Her lectures use historic postcards, interviews with children of Carr, and photos to honor her super heroic work in environmental conservation. Listen to learn and get an intimate look into the life of a powerful woman in Florida’s recent history and celebrate her legacy.

Dr. Peggy Macdonald is a public historian and adjunct professor at Stetson University and Indian River State College. A native Floridian, she gives presentations on Florida women's history with the Florida Humanities Florida Talks program. Her publications include a biography of environmental activist Marjorie Harris Carr and a forthcoming book on Florida's female pioneers. Dr. Macdonald has written about local and Florida history and culture for Gainesville Magazine, Our Town Magazine, Senior Times and FORUM Magazine. She is an alumna of the University of Florida, where she received a Ph.D. in American history. Dr. Macdonald served as Executive Director of the Matheson History Museum from 2015 - 2019.

Jenny Carr is President of the Florida Defenders of the Environment, and organization founded by her grandmother. She grew up in Gainesville and developed her love of nature from many excursions to the Carr family farm in rural Micanopy, FL, where she learned of the environmental legacy of her grandparents, Marjorie and Archie Carr. She received her bachelor’s degree in Wildlife Ecology and Conservation from the University of Florida. She earned a Masters degree in Sustainable Development Practice from the Center for Latin American Studies at UF. Jenny is currently the lab manager of the Biosecurity Research and Extension lab at the University of Florida’s Entomology and Nematology Department, Doctor of Plant Medicine Program. Jenny became motivated to take on a leadership role in Florida Defenders of the Environment in April 2019 after the Entomology department had a surprise visit from Governor DeSantis doing a press conference about his environmental goals alongside Florida’s first chief science officer, Dr. Tom Frazer, the director of the UF School of Natural Resources and Environment.

Get this book for FREE! Read info below. 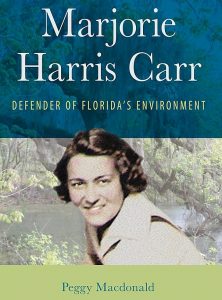 The story of a Florida mother of five who stopped the U.S. Army Corps of Engineers from killing a river.

Written by Dr. Peggy Macdonald, Marjorie Harris Carr: Defender of Florida's Environment (University Press of Florida, 2014) is the first full-length biography of the self-described “housewife from Micanopy,” who in reality struggled to balance career and family with her husband, Archie Carr, a pioneering conservation biologist. For 35 years, Carr tirelessly led a coalition of citizen activists in the continuing battle to protect and restore the Ocklawaha River. To this day, this little-known river in the heart of central Florida remains blocked by the remnants of the Cross Florida Barge Canal, a U.S. Army Corps of Engineers project that Carr and her fellow Florida Defenders of the Environment (FDE) activists stopped before its construction was completed.  Marjorie Harris Carr is an intimate look at this remarkable woman who dedicated her life to conserving Florida’s wildlife and wild places.

This book is one of the University Press of Florida's ten "Quarantine Reads" in the month of May. You can enjoy the digital version of this book for FREE on eReaders such as Kindle, Nook, and Kobo through May 31, 2020.