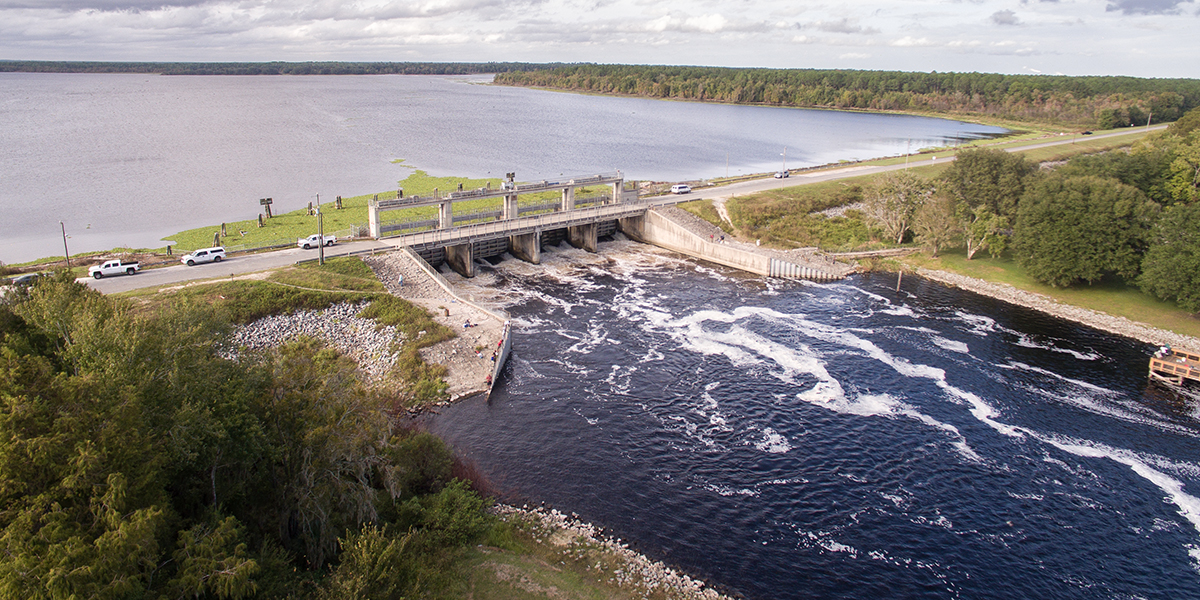 1943    The US Army Corps of Engineers released plans for the project.

1968    Rodman Dam, near Palatka, is completed closing off flow of the Ocklawaha River, flooding more than 7,500 acres of forested wetlands, 16 miles of river and at least 20 springs, and blocking upstream migration of many fish and aquatic species impacting the ecosystem from the St. Johns River to Silver Springs and beyond. Additionally, it prevented boats from navigating the entire river system.

1969     Environmental Defense Fund and Florida Defenders of the Environment file suit against the U.S. Army Corps of Engineers calling for a halt of the Cross Florida Barge Canal

1971    Florida Game & Freshwater Fish Commission recommends that the Rodman reservoir be drained, and the dam be breached to restore the river.

1978    Final Environmental Impact Statement by the U.S. Army Corps of Engineers concludes draining Rodman Pool and restoring the river would have no significant socioeconomic impacts.

1993   Florida legislature allocates $900,000 for a study of four possible scenarios for restoration. Partial restoration was the option selected and supported by federal and state agencies and Florida conservation organizations.

1995 – Governor Lawton Chiles directs FDEP in cooperation with SJRWMD to begin a phased drawdown of the Rodman Reservoir and to move forward with the partial restoration option to restore the Ocklawaha River.

1997 – FDEP applies to SJRWMD for restoration of the Ocklawaha River. In 1999, SJRWMD deems that additional water quality studies are needed. Studies were completed showing that restoration benefits outweighed any short-term water quality impacts related to restoration.

1998 – The Florida Legislature renamed the Rodman Dam the Kirkpatrick Dam in 1998. Kirkpatrick was a zealot about maintaining the dam for a vocal group of bass fishermen.

2002 –USFS completed an EIS in 2002 that called for restoring the Ocklawaha and partially removing the Rodman dam to connect the river. They gave the state of Florida a special use permit to temporarily retain the Rodman dam and pool on USFS land based on the state’s commitment to complete the river restoration. The permit has lapsed, and the state of Florida is operating structures on USFS lands without a permit.

2018 - Florida Defenders of the Environment unsuccessfully sues the USFS to require the state to partially remove the dam to connect the river according to the 2002 agreement. The suit did not fail on the merits of restoration but on an issue of organizational standing.

2019 – FDEP’s Marjorie Harris Carr Cross Florida Greenway State Recreation and Conservation Plan is updated and continues to say “The Governor and Cabinet, sitting as the Board of Trustees of the Internal Improvement Trust Fund, have an established policy that the Ocklawaha River should be “partially restored” with the FDEP as the lead agency. However, the Legislature has not appropriated funds for this purpose. If funds are made available and permits are issued, it is the intent of the FDEP to undertake this restoration.”

“Partial restoration is intended to restore river hydrology and floodplain function to near preconstruction conditions through breaching the dam, with limited removal and/or alteration of structures and alteration of the topography. This alternative will retrieve National Forest System lands at the lowest cost while restoring river and floodplain hydrology.”

2019 – An alliance of conservation organizations joins forces to assist in gaining support and funding for partial restoration of the Ocklawaha River as outlined in the USFS environmental impact statement and the FDEP Greenway Plan.

Key Reference: Ditch of Dreams: The Cross Florida Barge Canal and the Struggle for Florida’s Future by Steven Noll and David Tegeder, 2009.